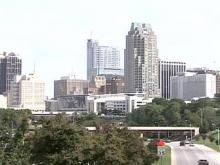 Raleigh, N.C. — The recession could be a lot worse for people in the Triangle than it is, according to Forbes magazine.

In its annual Best Places for Business and Careers rankings, Forbes said no metro area in the U.S. can compare to Raleigh. It was the third year in a row that Raleigh topped the list.

Durham was ranked No. 3 on the Forbes list – Fort Collins, Colo., was second – and Greenville finished second behind Sioux Falls, S.D., on the list of best small metro areas.

The magazine cited the Triangle's strong job growth – both past and projected – low business costs and highly educated work force.

Forbes said the number of jobless will likely continue to grow this year after five years of 4 percent annual job growth. The employment picture is expected to brighten in 2010 and 2011, however, and Moody's Economy.com projects a three-year annual employment gain of 1.4 percent, which would be the 15th-best in the country.

"Raleigh is holding up better than any other place in North Carolina," Matthew Martin, an economist at the Federal Reserve Bank of Richmond, Va., told the magazine.