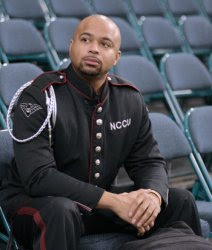 The North Carolina Central University Marching Sound Machine isn’t like other HBCU bands. This group from Durham, N.C., prides itself on being a hybrid corps/traditional band. Just what does that mean for its members? Halftime Magazine caught up with Director of Bands Jorim Edgar Reid to find out.

North Carolina Central University’s (NCCU) Director of Bands Jorim Reid set his sights high. He came to NCCU seven years ago with the goal of completely retooling the band, which then featured only 32 members. The Marching Sound Machine now features more than 200 members and marches in a unique hybrid corps/traditional style. It combines a drum corps style with the traditional Historically Black College or University (HBCU) “show band” style, making it one of the only HBCUs to use pit percussion.

Reid earned his undergraduate degree at Florida A&M University, where he served as drum major, and his masters from Florida State University, both in Tallahassee. He is currently pursuing a doctorate at Boston University. Halftime Magazine was lucky enough to find Reid in a rare spare moment to discuss his career, his unique band and his goals for the future.

Halftime: Tell me about your music and marching career. What made you want to be a director?

Reid: When I grew up in South Florida, they have this classic called the Orange Blossom Classic that would come down to Miami. The two bands I used to watch were Florida A&M University and Miami Norland High School. … I watched the two bands in the parade and became interested in music. I never imagined that I would be under the direction of those two band directors.

Halftime: Why is the band called the Marching Sound Machine?

Reid: The Marching Sound Machine is the name I came up with. The name comes up with 20 letters, which are 20 principles that everyone in the band must commit to memory. That first letter “M” is musicianship. We take the philosophy of the 20 principles, and we try to live by it. [Visit Halftime Magazine’s “Web Exclusives” section at www.halftimemag.com for the rest of NCCU’s 20 principles.]

Halftime: What makes your band unique?

Reid: Our marching band is unique because we are built around the least visible music program on campus, which is our symphonic band. The marching band usually gets most of the attention, but the serious focus and music that we pay attention to with the symphonic band helps to build our band and numbers.

Also, we are an HBCU, and we call ourselves a hybrid—we use all sorts of styles. You don’t want to be a dinosaur because you’re going to wind up being extinct if you don’t evolve. We want to make sure that our music education grads can be qualifi ed to teach at any high school, not just one with a traditional style. … Some also say that we’re the first HBCU to use pit percussion.

Halftime: How do you combine the corps and traditional style?

Reid: A lot of HBCU band directors and African-American band directors discuss this. We’ve gotten to the point where we call ourselves “show bands,” and it’s got a negative connotation. It’s not correctly titled. All bands do shows.

[HBCUs] don’t just do dance routines all the time. We do shows and music just like every other band. The style that we use is really a traditional style. … It originated, really, with the Big Ten. It’s a lot of old-style marching, which is the high knee lift.

Show bands are often associated with African-American bands. More correctly termed “traditional bands” are considered not to play as well. My band—as well as other HBCU bands—we try to take the risk and say, “Hey, we have good musicians out there; we can play.” We have limited resources sometimes, but these kids can play.

Halftime: How does your band break out of the mold of other HBCU bands?

Reid: We just risk it; we push the envelope. When we went to the Honda Battle of the Bands, we opened without a drum major whistle. We had a sextet on the field … and we opened with kind of a scene from the movie “Saw.” Our pit percussion started with the motif from the movie instead of the traditional drum cadence while the announcer talked.

[We broke the mold] out of necessity because, when we started the band, we only had 32 people; the sound just didn’t really accommodate us. If we only have eight trumpets, only one of our trumpets might be facing the press box. I do the drill design and position our band. We kind of trick the audience into our sound, so we sound clearer and fuller. It’s really the positioning of the instruments. That’s really a concept of corps, to have the instruments facing the press box most of the time.

Halftime: How do you keep marching band interesting for your students?

Reid: We keep them engaged by keeping them involved. We keep them involved in show planning and selection of the music. Student leadership is for us to prepare them to do everything we do. They should be able to direct the band, arrange music [and know] how to tune a drum even though [they] play the oboe. For example, I got a bunch of text messages asking, “Can we play the Batman theme?” We keep them involved to allow them to have a say. The only thing I’m not and will never budge on is the musicianship. We can play anything, within taste, as long as we play it with musicianship, balance and blend.

Halftime: What do you tell your students the first day of band camp?

Reid: That it’s about the musicianship. It’s easy to play as many songs as you can as loudly as you can, but when you really learn your instrument and play your instrument to the best of your ability, you’ve really earned the right to be on the field. In the long run, people really will buy into quality.

Reid: Walking with Hillary Clinton at Florida A&M [as drum major]. … I had her on my right arm, and I had to escort her 50 yards to a ladder where she’d speak. There were a lot of pictures everywhere with that one. At the inaugural parade, I waved to her again [Reid marched the inaugural parade twice with Florida A&M].

Halftime: What are some of your goals?

Reid: We want to eventually go out there to the Rose Bowl Parade, the Macy’s Day Parade, the Orange Bowl, etc.—anything that can be an experience to the students and provide exposure for the university.

Ultimately, our goal is to improve our quality and our reputation, so that we can be the next HBCU to get the Sudler Trophy. My alma mater [Florida A&M University] is the only HBCU to have one in its band room.

Eddie Carden is an editorial intern for Halftime Magazine. He is a senior, majoring in public relations and neuroscience, at the University of Southern California. He has been playing the trumpet since the fifth grade and currently serves as the drum major for the USC “Spirit of Troy” Trojan Marching Band.